Daniel Armstrong and Kyle Schuh are proof that small-business success can come at an early age – if you take the right approach.

Just over three years in business, the owners of 605 Painting are busier than they ever imagined when they struck out on their own.

“It’s been unbelievable,” said Schuh, 23, who learned the painting industry from his father, Derek. “Words really can’t describe how quickly it’s grown. But we figured out really early if you treat people well, you’ll have a lot of success. We just build relationships with every customer we get.” 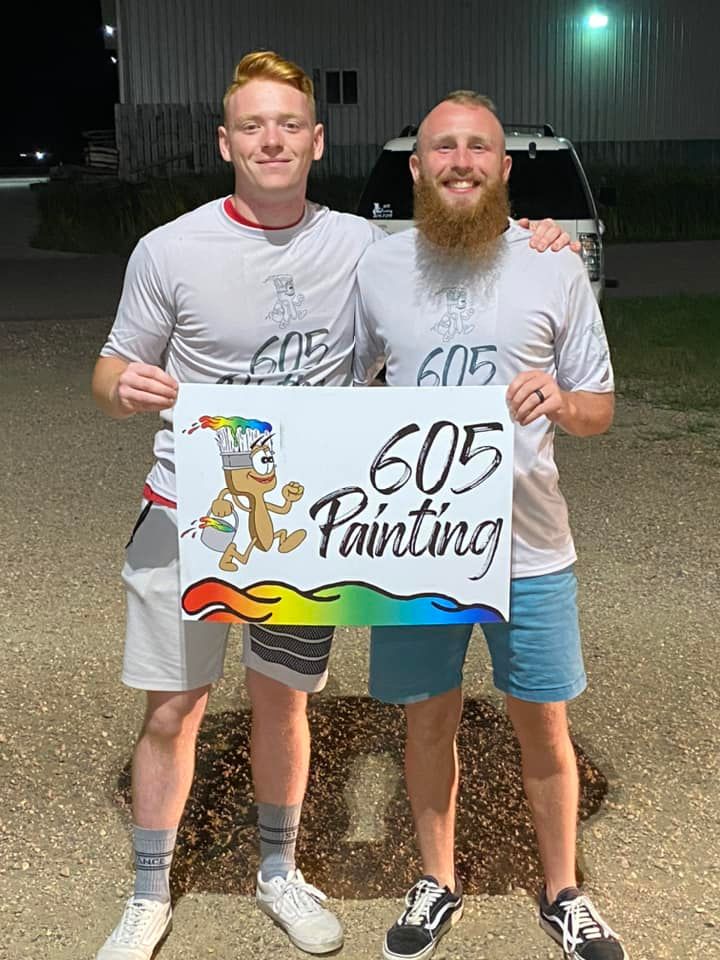 Those relationships have led to more. He said it’s the biggest reason why 605 Paint now has more than 100 customers awaiting estimates – a number the owners are dedicated to keeping as happy as all the rest.

“We have the second-highest number of reviews on Google in our trade, and they’re nothing but five stars,” said Armstrong, who is 25. “We’re not perfect, but if we make a mistake, we own it, and we make it better.” 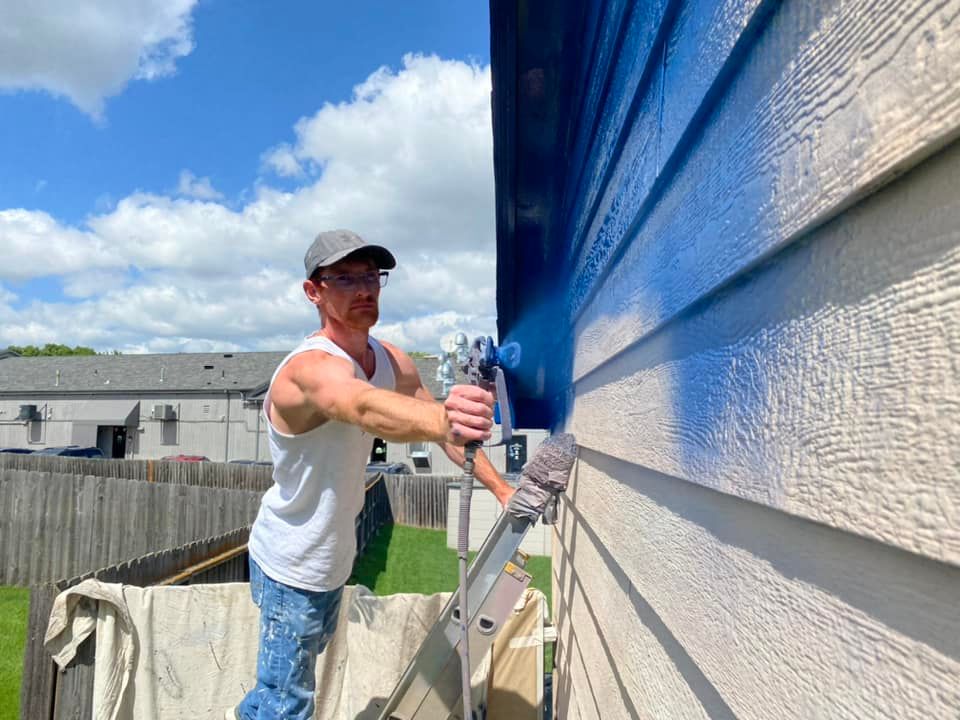 Armstrong and Schuh’s business partnership is the result of a lifelong friendship. They grew up together, attended Roosevelt High School at the same time, worked in a grocery store together and then started painting together over spring break in college.

“We had worked for two painting contractors in town, and then we threw our brushes down,” Armstrong said. “We’d had enough.”

But painting stayed in the back of his head while at the University of Sioux Falls. He began learning more about business and considered picking up a paintbrush again – this time as an entrepreneur. Schuh continued working with his father in the trade.

“I was like, ‘I think we can do this,’ and we were like, ‘Let’s just go work for ourselves’ and that’s what we did,” Armstrong said.

While they began with interior and exterior residential work, it wasn’t long before they landed what would become one of their biggest projects yet.

“We ended up painting the full interior of the Ramada Hotel off Russell – probably three months into our business – and we scored 150 hotel rooms. It was the biggest thing we could have hoped for,” Armstrong said. “We got blessed with what’s still one of the biggest jobs we’ve ever done.” 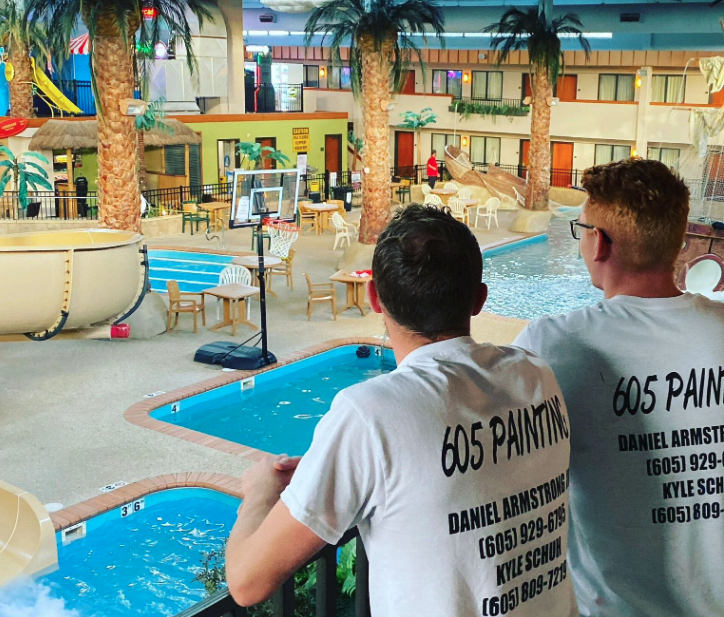 Fast-forward a few seasons, and today 605 Painting primarily works homeowners, though commercial business is still part of the mix.

“It’s mostly businesses looking to refresh, day cares, but residential is our bread-and-butter,” Schuh said. “We love it. But when we’re painting a business, that’s also a great experience for our employees and something they can get excited about it.” 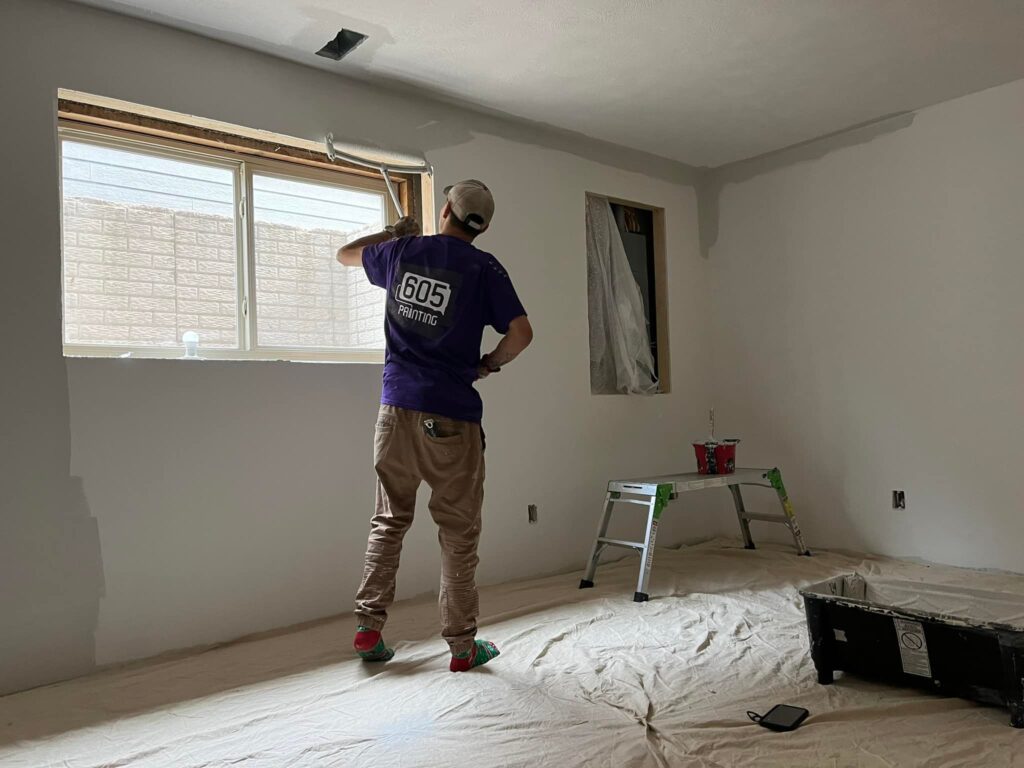 They’ve grown to a team of eight with an office and well-organized shop in Tea.

And while sitting in the office one day kicking around ideas, Schuh was inspired by his frequent trips to the gym.

“I go to GreatLIFE a lot, and my girlfriend works there, and I remembered their member benefits,” he said. “We love eating Qdoba and use the discount, and I was thinking it’s pretty cool GreatLIFE has partnerships with other businesses, so why can’t we be on there?”

He walked into GreatLIFE the next day, connected with Jacki Pranger, director of corporate partners, and it was an immediate fit.

“We loved everything we heard and decided to be partners,” Schuh said. “And now we do a lot of advertisement through them. We have a banner at Woodlake and decaling at Harrisburg, and our favorite is Performance Center.” 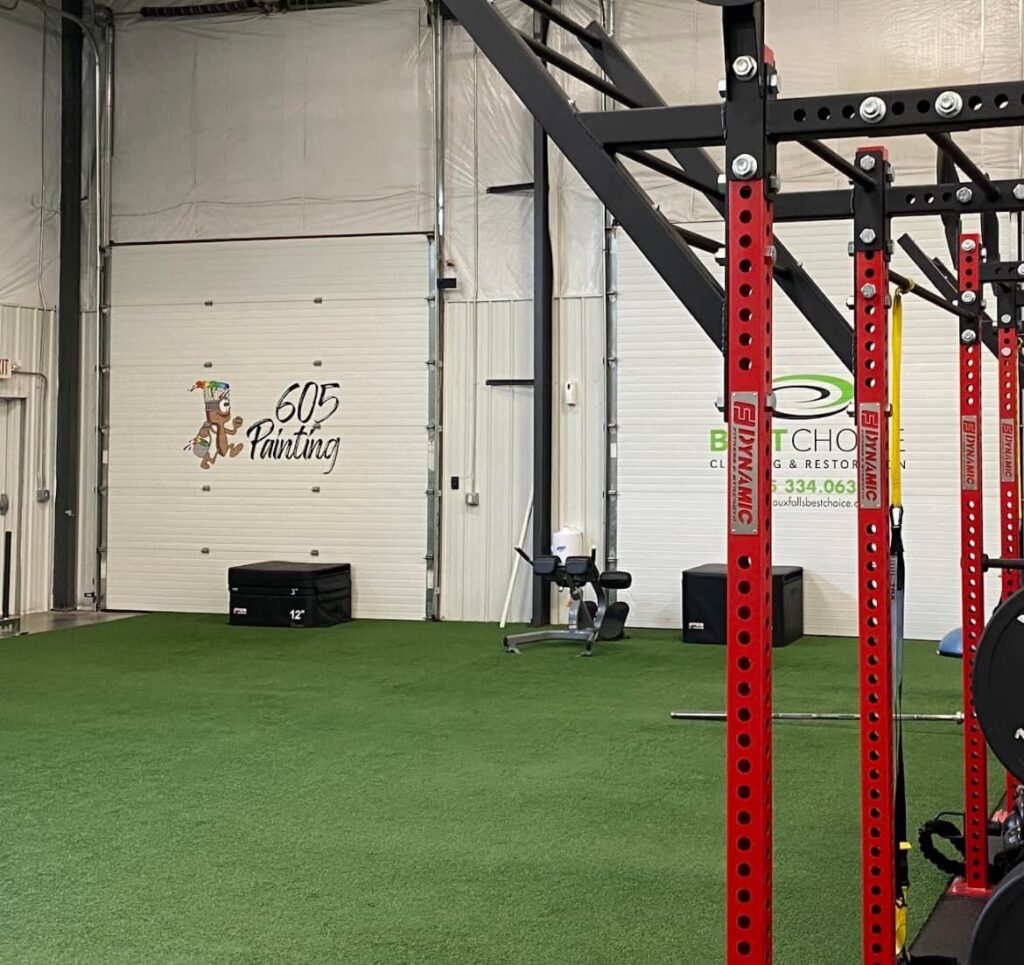 At that fitness center, 605 Painting designed an accent wall with a metallic background and GreatLIFE colors. 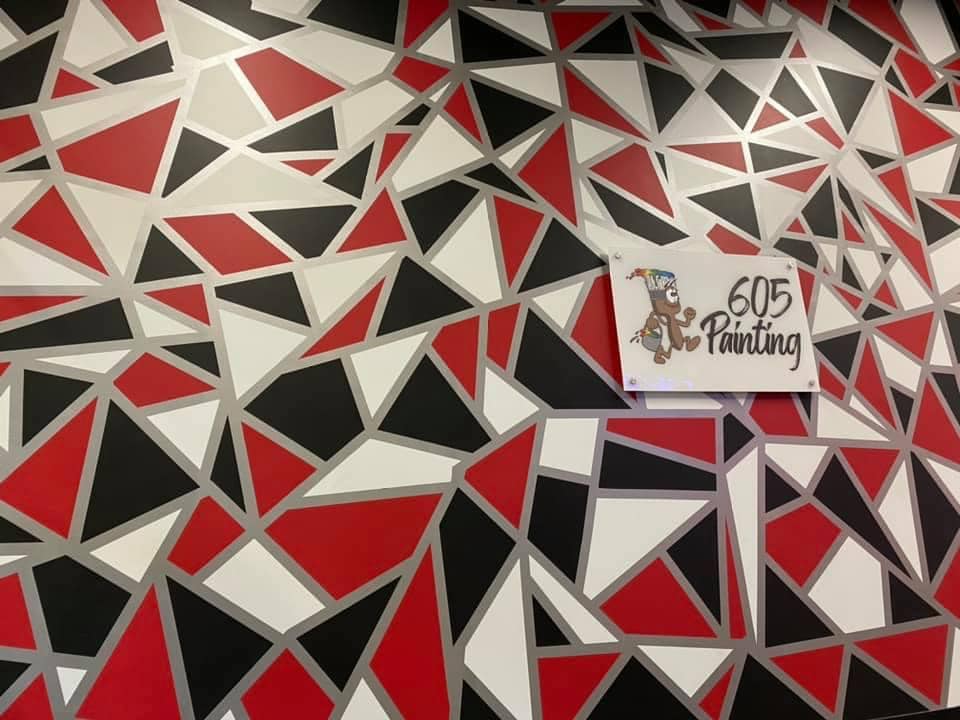 “We love our relationship with 605 Paint,” Pranger said. “Not only do they do great work, but they approach their business with the same customer-first mindset as GreatLIFE and that shows in how loyal their customers have been and how often they recommend others.” 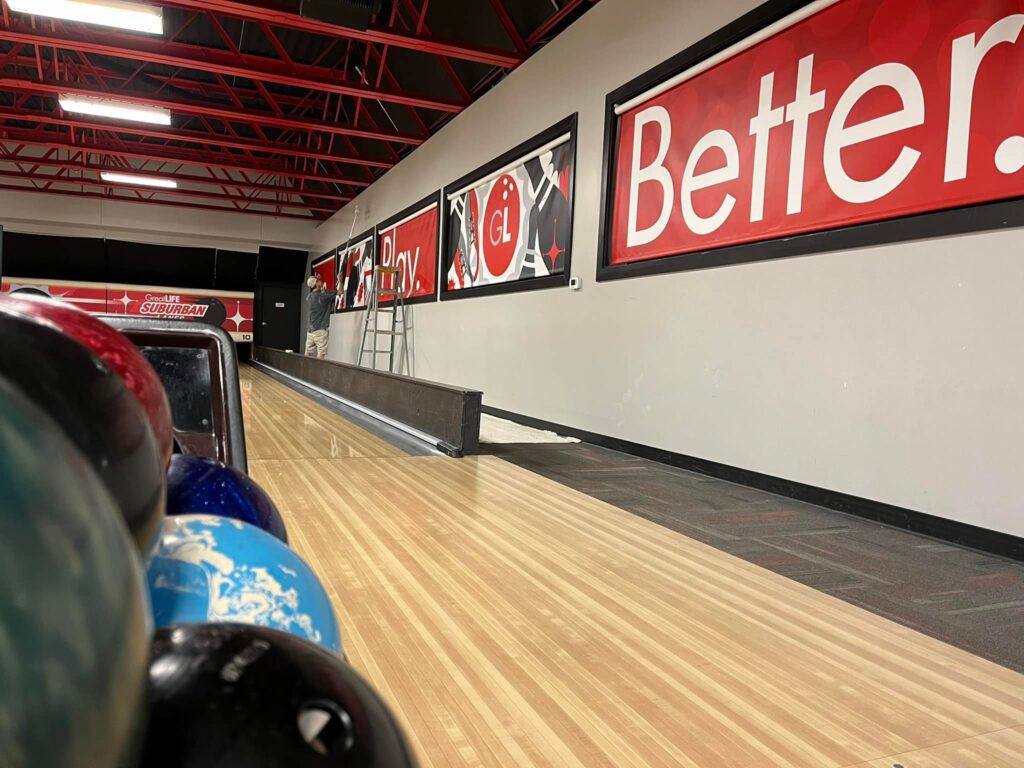 Both organizations also are committed to community. They recently partnered on sand volleyball tournament for the second year benefiting the Bishop Dudley Hospitality House and GreatLIFE’s PLAY Everything youth programs. 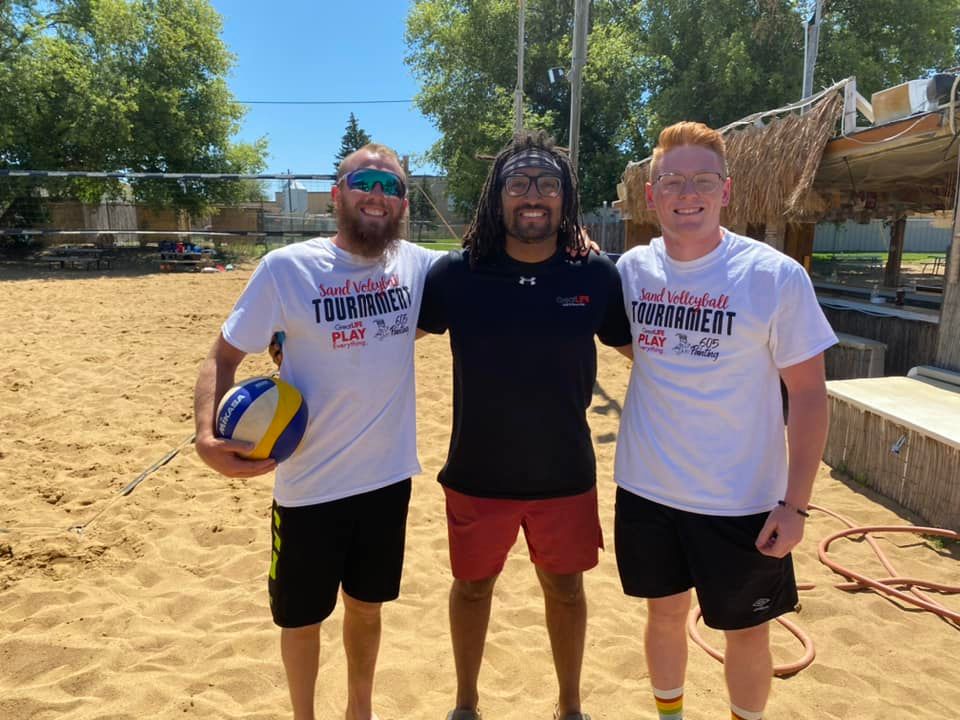 “That’s important to us. We’re not just a paint company. We like to get involved in the community,” Schuh said. “At the holidays, we’ll load up on gift cards and reach out to families in need, and we volunteer in various ways. When you have the power to change someone’s life, it just feels good.”

Both “came from humble beginnings,” Armstrong added. “We are absolutely blessed, and we want to be a blessing to others.”

As corporate partners with GreatLIFE, 605 Painting offers its employees discounted membership to the unlimited golf and fitness business. Armstrong and Schuh are both members who enjoy both the fitness options and the savings they get on everything from dining out to shopping and services. 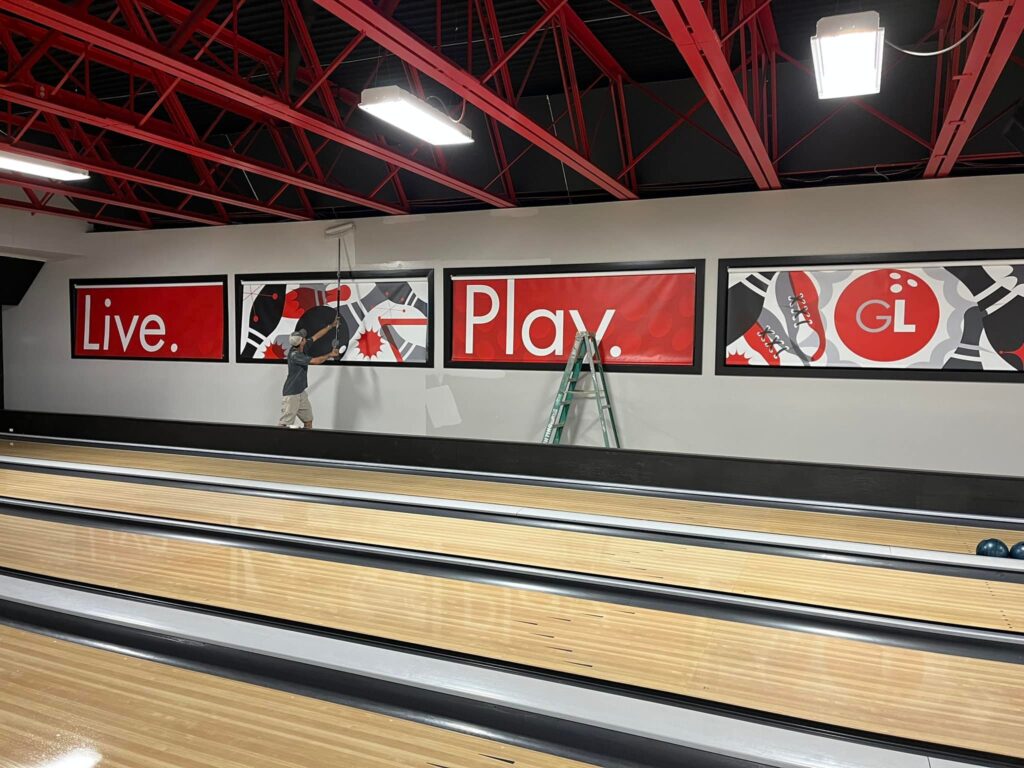 They also offer members their own discount: GreatLIFE members save $100 on any interior or exterior painting service.

“We’ve had customers tell us they’re GreatLIFE members, which is always cool to hear, and we’re happy to offer that perk,” Schuh said.

As for the future of 605 Painting, the owners likely are just getting started. Next steps could include adding epoxy services and expanding from there.

“The sky is the limit, honestly,” Schuh said. “It’s going to grow as big as we let it grow. I don’t think it’s going to stop at painting. I think there’s a lot more in the city we can venture into and not limit ourselves to one thing.”

Want to connect with GreatLIFE about your own corporate partnership? Contact Jacki Pranger atjacki.pranger@joingreatlife.com.